Hi my name is Shaun Fehr, and I am glad you are here.  It has been through personal experiences and an evolution of thoughts and actions that have shaped the development of the Sprout Network.

Before my daughters’, Hayden, first birthday, my wife and I were told she was born with a rare genetic condition.  From that moment on we were pulled into a life of uncertainty.  Little did we know the next two years would be the most difficult that we would ever experience.  Fear, chronic stress, anxiety, and an overwhelming feeling of gloom would take hold of our lives.

She spent over four months in hospital in her first 3 years.  At the worst point, she would experience up to 100 seizures a day, barely waking between each one.  Through a two month hospital stay in 2016, mostly in the PICU, we started to see something that we had been oblivious to prior. We began to see other families in similar situations, with kids fighting for their lives.  We had come to learn about another world that existed, the world of disability and medical challenges.

Through all of these challenges, I started thinking about Hayden’s future and what could be done now to help build a world that supported her.  This dream started to consume me as a way to cope with the fear of the unknown.  After another lengthy hospital admission, an idea started forming.  We launched our first initiative, Tuff Sprout, a brand where we could help tell stories of kids facing extraordinary challenges while raising a little bit of money to help other organizations.  We created a Care Blanket, meant to elicit feelings of hope and strength through difficult times.  We also started working on a children’s book about a mothers journey with her child and what that looks like through a child’s challenges.  We did some good things with Tuff Sprout and raised some money, but my attention was pulled into another direction.

I kept hearing of families struggling in their day to day life.  Life doesn’t pause when crisis happens.  Bills still need paying and food still needs to be purchased.  Our system isn’t set up to accomadate each persons personal situation into account.  What is truly needed is a world that responds with empathy and support and adjusts accordingly.  I become curious about other families and their level of support through the day to day challenges so I put together a small survey to see what I could find out.  The survey respondants were parents or family members of a child with a disability or health condition. 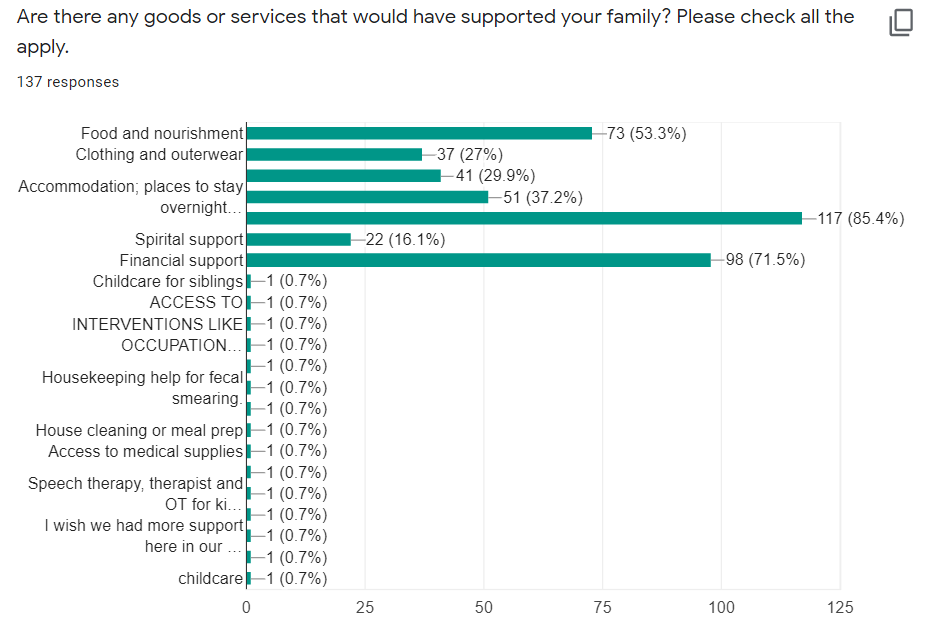 Out of 137 responses, 63% had a large shift in employment situations.  This lines up with the 72% of respondants that said financial support would have helped.

Life happens, but the world carries on.

I wanted to start looking at some of these issues and to broaden my perspective a little bit more and look at an issue affects many others in society.  Poverty.  As Hayden grows up, the level of support will shrink,,

For Canada alone, some of the statistics paint a disturbing picture.  For instance, regarding disability and poverty

Outside of disability, I learn that children are largely affected by poverty, especially indigenous children.

The reference to 'Sprout' became a symbol of potential, that when we support and nurture someone going through a difficult time, we can empower them to reach their potential.

The Creation of Sprout Network

Along our journey we have come to recognize there alearn of the daily struggles that so many families deal with as a result of a prolonged period of stress.  The challenges extend beyond the hospital walls into However, for hundreds of thousands of families across Alberta and Canada, there are often many additional challenges outside of what goes on inside the hospital.  These challenges could be not receiving adequate support from the formal system, people not understanding the struggle, and the emotional and mental exhaustion that comes with a medical challenge.

In a world of extreme excess, we believe a community supply ecosystem can help alleviate the pressures of many people facing poverty and food insecurity.

Mobilize the community to help support the vulnerable populations and organizations that serve them.

Covid-19 has drastically impacted the in-kind donations many organizations in the community receive.   We feel we can help in this problem and create a more effective way to provide in-kind gifts to organizations that rely on this type of support.